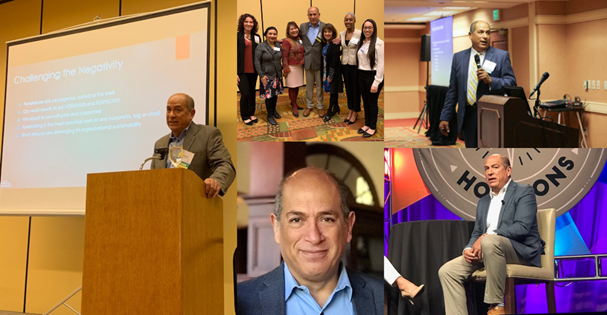 Armando Zumaya has been in fundraising for 36 years in a variety of roles that have given him a unique perspective on all aspects of development offices, fundraising culture and Latinx in the US nonprofit world.  He founded Somos El Poder because of his experiences of his long career in development, his success in teaching fundraising and a deep pride in his Chicano heritage.

He has spent the bulk of his fundraising career as a Major Gift, Leadership Gifts and Annual Fund Officer on two $1+ billion dollar campaigns at Cornell University and the University of California, Berkeley. He began his career in 1985 as a canvasser for SANE/FREEZE in Los Angeles and Ithaca N.Y. where he led door to door canvassers in the field for 5 years.  He has served in the Vice President of Development, Director of Major Gifts and Chief Development Officer, Annual Fund and Leadership Gift roles.

He is well known for his work in teaching prospecting, solicitation, cold calling, major gifts techniques and remote constituency fundraising.  He has been a tireless advocate for improving the Prospect Researcher/Fundraiser relationship and creating a prospecting culture inside development teams.

He is  well reviewed speaker. His session at the 2018 AFP International Conference was one of the few highlighted in the Chronicle of Philanthropy's coverage of that conference out of 116 sessions in their April 17th, 2018 issue.
​
Armando has also lectured at APRA, AFP Chapters, AFP Hemispheric, APRA Chapters, BBCON, GIFT, AFP, The Foundation Center, Development Executives Roundtable, CARA, SAWA, MARC, Compass Point, Blackbaud, Forum on Fundraising and Academic Impressions. He has been featured in the Stanford Social Innovation Review, the Chronicle of Philanthropy, APRA Connections, the Grassroots Fundraising Journal, and other publications.

He has been widely published including the nationally acclaimed OpEd in the Chronicle of Philanthropy on March 24, 2014 entitled “Give Fundraising Researchers More Influence and More Credit”. He has also been published in the Grassroots Fundraising Journal, Currents (The Magazine of CASE) The Major Gifts Report Fundraising Compass, Bloomerang, Frost on Fundraising and others.

He lives in Northern California and is a proud alumnus of the University of California, Riverside and Theodore Roosevelt High School in Boyle Heights, East Los Angeles.
EMAIL ARMANDO
Support SEP!
“Hope arouses, as nothing else can arouse, a passion for the possible.”
-- William Sloane Coffin
​"You can't wait for hope, you have to be hope"!
--Rep. Alexandria Ocasio-Cortez
​“Es mejor morir de pie que vivir de rodillas.”
--Emiliano Zapata
Para AMR