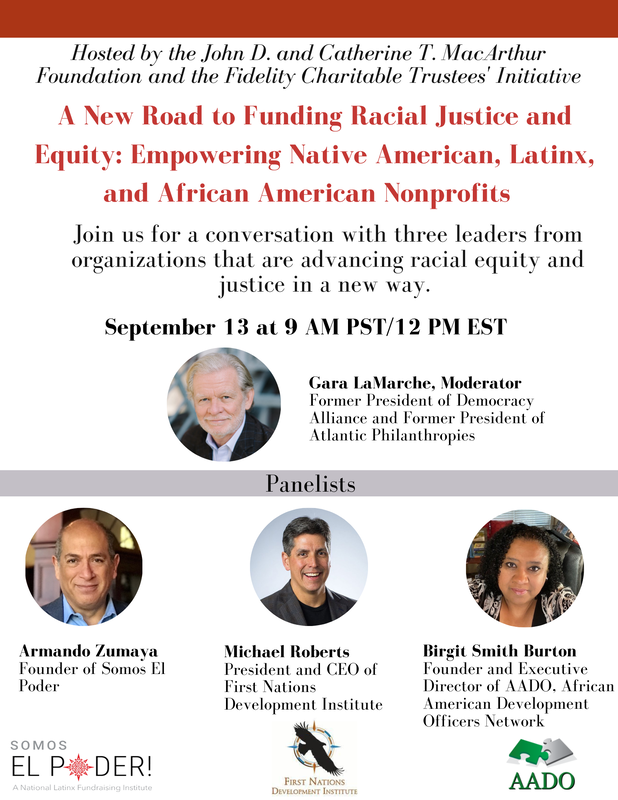 ​Let’s talk about building powerful, resilient nonprofits that advance racial justice and equity in the US today.
You’re invited to a discussion with three leaders from leading organizations that are advancing racial equity and justice in a new way. These organizations are working to empower nonprofits serving Latinx, African American, and Native American communities across the US through innovative methods of fundraising.
Come learn about this new movement. Our discussion, hosted by Gara LaMarche will cover many areas of this unique topic including:
Link to Recording:
​Link: https://macfound.zoom.us/rec/share/pqMzpzTj8iFpusZCyc2C7enrLRF75XLwusi-EF_JYX39u5WCF9EaaVpXAwlxzlda.ZvYOf-GhOh805Xlo
​
Passcode: 0@EzYtX2
About Our Moderator and the Panel
Gara LaMarche
Gara LaMarche is a longtime advocate for human rights and social justice. He is a Senior Fellow at the Colin Powell School of Civic and Global Leadership at City College of the City University of New York, Senior Adviser to The Raben Group, and Senior Fellow at Encore.org, as well as a consultant to a number of human rights and social justice organizations and leaders.
He was most recently president of the Democracy Alliance, providing overall leadership, strategic vision, and management capacity for the organization. Prior to joining the Alliance, he served as a senior fellow at New York University’s Robert F. Wagner Graduate School of Public Service and previously, as president and CEO of the Atlantic Philanthropies. At Atlantic, Gara led the foundation’s efforts to embrace a social justice framework for grantmaking, and spearheaded the largest-ever grant made by a foundation for an advocacy campaign – over $25 million to press for comprehensive health care reform in the U.S. Before joining Atlantic in 2007, he served as vice president and director of U.S. Programs for the Open Society Foundations, launching the organization’s pivotal work on challenges to social justice and democracy in the United States. A longtime advocate for human rights at home and abroad, Gara has held various positions with Human Rights Watch, PEN American Center, and the American Civil Liberties Union.
Gara is a frequent commentator on progressive issues in the news and is the author of numerous articles on human rights and social justice issues, which have appeared in the New York Times, Washington Post, Financial Times, The Nation, and American Prospect, among many others. He has taught courses on philanthropy, public policy, and nonprofit leadership at Hunter College and NYU’s Wagner School, as well as courses at the New School University and the John Jay College of Criminal Justice. A Westerly, Rhode Island, native, he is a graduate of Columbia College at Columbia University in New York.


Armando Enrique Zumaya
Armando Zumaya has been in fundraising for 36 years in a variety of roles that have given him a unique perspective on all aspects of development offices, fundraising culture and Latinx in the US nonprofit world.  He founded Somos El Poder because of his experiences of his long career in development, his success in teaching fundraising and a deep pride in his Chicano heritage.

He is a noted expert on Latino Major Giving and all aspects of fundraising with the Latinx community. He has direct experience raising five, six and seven gifts from Latinx. He lectures and writes about the Latinx experience in the nonprofit world. His work includes direct experience raising five, six and seven-figure gifts from Latinx in the US. He is an active development officer.

He has spent the bulk of his fundraising career as a Major Gift, Leadership Gifts and Annual Fund Officer on two $1+ billion dollar campaigns at Cornell University and the University of California, Berkeley. He began his career in 1985 as a canvasser for SANE/FREEZE in Los Angeles and Ithaca N.Y. where he led door-to-door canvassers in the field for 5 years.  He has served in the Vice President of Development, Director of Major Gifts and Chief Development Officer, Annual Fund and Leadership Gift roles.

He is well known for his work in teaching prospecting, solicitation, cold calling, major gifts techniques and remote constituency fundraising.  He has been a tireless advocate for improving the Prospect Researcher/Fundraiser relationship and creating a prospecting culture inside development teams.

He is  a well-reviewed speaker. His session at the 2018 AFP International Conference was one of the few highlighted in the Chronicle of Philanthropy's coverage of that conference out of 116 sessions in their April 17th, 2018 issue.
​
Armando has also lectured at APRA, AFP Chapters, AFP Hemispheric, APRA Chapters, BBCON, GIFT, AFP, The Foundation Center, Development Executives Roundtable, CARA, SAWA, MARC, Compass Point, Blackbaud, Forum on Fundraising and Academic Impressions. He has been featured in the Stanford Social Innovation Review, the Chronicle of Philanthropy, APRA Connections, the Grassroots Fundraising Journal, and other publications.

He has been widely published including the nationally acclaimed OpEd in the Chronicle of Philanthropy on March 24, 2014 entitled “Give Fundraising Researchers More Influence and More Credit”. He has also been published in the Grassroots Fundraising Journal, Currents (The Magazine of CASE) The Major Gifts Report Fundraising Compass, Bloomerang, Frost on Fundraising and others.

He lives in Northern California and is a proud alumnus of the University of California, Riverside and Theodore Roosevelt High School in Boyle Heights, East Los Angeles.

Birgit Burton
Birgit is the Founder and Executive Director of AADO, the African American Development Officers Network, which she launched at Georgia Tech in 1998 to provide professional development, education, employment support, mentorship, and networking opportunities for African American fundraisers. She is a well-regarded speaker on the topics of fundraising and diversity and has authored articles on diversity in the fundraising profession, co-authored the book, The Philanthropic Covenant with Black America, and contributed to the book Five Minutes for Fundraising, A Collection of Expert Advice. Birgit is honored to tell her personal story in the book Collecting Courage, which shares the lived experiences of Black women and men working in the nonprofit and charitable space (published fall 2020). During her 25-year career at Georgia Tech, Birgit was selected to participate in the first cohort of Leading Women @ Tech and chosen as one of the 2020 Faces of Inclusive Excellence, which recognized faculty, staff, and students committed to gender diversity, equity, and inclusion. Birgit serves on the global board of the Association of Fundraising Professionals (AFP) and recently was voted as the Chair-Elect for 2021. She has the distinction of being the first African American woman in AFP’s 60-year history to serve in this role. Birgit received the Opportunity and Inclusion Award from the Council for the Advancement and Support of Education which recognized her leadership in fostering inclusion and diversity within the fundraising profession. In 2020 the R.I.S.E. Fund was established in Birgit’s honor with a mission to advance women of color in fundraising by providing Resources, Inspiration, Support, and Education. Birgit chairs the A.E. Lowe Grice Scholarship Fund, serves on the advisory board for Hosea Helps, chairs the Ahmaud Arbery Foundation, and advises the Aspen Leadership Group. She is a member of Alpha Kappa Alpha Sorority. Birgit earned a bachelor's degree in media communications from Medaille College in Buffalo, New York and serves on its board of Trustees.


Michael Roberts
Michael Roberts (Tlingit) is the President and CEO of First Nations Development Institute, a position he was appointed to in 2005 after having served as a Research Officer and Chief Operating Officer for the organization from 1992 to 1997 and returning to First Nations in 2002.
In the interim, Mike spent five years in private equity, during which he advised angel investors and worked for a $500 million telecommunications fund and for an early-stage Midwest venture capital firm. Mike also worked at Alaska Native corporations and for local IRA councils, primarily in accounting and finance.
He has taught a graduate business course on venture capital for the MBA program of the Bloch School of Business at the University of Missouri Kansas City, and an undergraduate business course on entrepreneurship at Haskell Indian Nations University.
Mike serves on the board of First Nations Development Institute and is the immediate past chairman of the board of Oweesta Corporation. He is a board member and treasurer of the Sustainable Agriculture and Food Systems Funders Network and the Investment Committee for the Three Affiliated Tribes. Mike also serves on the board of directors for Native Ways Federation and the National Center for Responsive Philanthropy. Mike has held board positions for Native Americans in Philanthropy and the Association for Enterprise Opportunity (AEO). He has been an Advisory Council member for the Center for Native American Public Radio, and a National Advisory Committee member for the National Center for Family Philanthropy.
In December 2021, Mike was recognized by Unboxed Philanthropy Advisors in its “Philanthropy 100” list of 100 of the most significant foundations, corporations, nonprofits and individuals in philanthropy committed to innovations in transforming society and advancing justice.
In 2019, Mike received the Mitchell Museum of the American Indian Elizabeth Seabury Mitchell Award for exemplary service and philanthropic giving in promoting First Nations culture.
In 2018, Mike was appointed as one of 14 trustees of the new $266 million Native American Agriculture Fund that was created as an outgrowth of the Keepseagle v. Vilsack case. In April 2016, he received the Asset Builder Champion (ABC) Award, an initiative managed by the Center for Global Policy Solutions and the Insight Center for Community Economic Development. Mike was recognized along with fellow awardees Congressman Charles Rangel, Congresswoman Maxine Waters, and former Ford Foundation Vice President Melvin Oliver.
Mike holds an MBA degree from the University of Washington with an emphasis in finance and operations management, and a bachelor’s degree in architecture through the environmental design school at the University of Colorado. 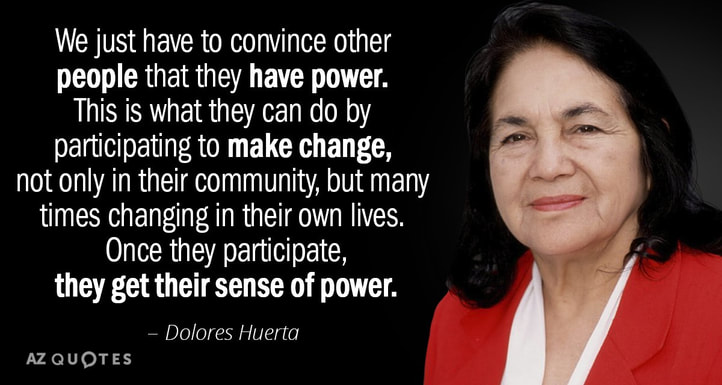